Managing Risk for Rock Legends — and Himself

My job is to eliminate risk.

easily things can go wrong at a rock concert. Night after night, every unique venue presents new challenges. And as the production director for the Rolling Stones 2019 tour, he’s seen a lot of venues. He’s been in the business since 1979 — back when harnesses weren’t standard equipment for workers climbing up into the ceiling to rig lights.

“Myself, I've only fallen once. It was about thirteen or fourteen feet, and I bounced off of what I hit,” recalls Opie. “So, at that young age, I probably bruised myself more than I broke anything. And then if I broke anything, I didn't care. I wanted to make my career. I’d say, ‘Okay, wrap me up. Put duct tape around me. I'll be fine.’”

From climbing harnesses to his annuities, Opie stays prepared

The risks that Opie and his crew face aren’t always physical. They’re financial too. “Our biggest risk is when the tour shuts down,” he says. “Honestly, that's where it's a big financial hit to people.” A tour can shut down for reasons as common as someone getting sick or as newsworthy as a hotel being bombed due to political turmoil on an international tour.

Having been in the business since 1979, Opie has learned to acknowledge risk and plan for it. If you know there’s a chance you might fall and hurt yourself at work, you need to create a financial cushion to catch yourself.

“No one's going to do it for us, especially in the entertainment world,” he says. “We had a lot of cash flowing around in the early days, so it was nice. But you have to put it away somewhere. It can’t sit in a safety deposit box all your life.”

This is advice Opie’s dad gave him back when he was an 18-year-old with dreams of going on tour, and Opie took it to heart. Today, he passes his dad’s advice along to the crew he travels with. He’ll share his financial wisdom with anyone who wants to listen because he knows how important it is to create your own plan in a freelance career that doesn’t offer a pension or 401(k). “A lot of them have called me later and thanked me,” he says. “I have a couple of guys that are really good friends that have since invested in annuities and other funds.”

As any hardworking crew member knows, success comes from teamwork. That’s why Opie not only shares his advice — he solicits it from others too. He has worked with financial advisors over the years after choosing experts that match his style. “As my dad said to me, if you leave the financial advisor’s office confused, he is not the guy for you,” Opie says.

With the help of trusted advisors, Opie has secured a financial future for his family. He has three annuities — one fixed rate and two variable — plus other accounts, which are connected to a trust.

“People should pay attention to their finances,” Opie says. “Yeah, I took a summer dream and turned it into my job, but I also made sure to save so I could have something for the future.”

So how does he define protected income? “It gives you the freedom to do what you need to do.” 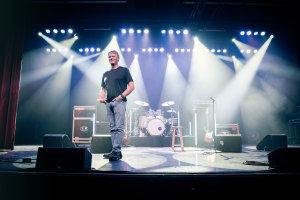